Find out what your silver coins are worth

Until part way through 1968, Canadian dollars, half-dollars, quarters and dimes contained at least some silver. (nickels, as the name suggests, are made from nickel and not silver… but before they were called nickels, there were tiny silver 5-cent coins called a half-dime.)

Excluding the oldest coins and a few other rare years, most of these coins are valued based on their silver content.

1920 – 1966: 80% silver content. Each dollar of face value from these years contains 0.6 oz of pure silver, and most coins in this range sell for silver value only. But keep on the lookout for 1947 and 1948 coins – these rare years sell for much more than melt value.

1967: Dollars and half-dollars – 80% silver. Quarters and dimes: ~ half 80%, half 50% (they switched the purity these coins were made halfway through the year). Canada Gold’s payouts for these coins is based on the average of 65% silver.

1968: Dollars and half dollars – no silver content. Quarters and dimes: ~ half 50% silver, half no silver content. (The easiest way to tell them apart is to test with a magnet. Canadian coins with silver content are never magnetic, so if a 1968 quarter jumps on the magnet you know it is not silver).

1969 and later: No circulated coins from these years contain any silver content. Some common commemorative coins contain 50% silver, and some from recent years contain 92.5% silver.

Here is how we sort and evaluate Canadian coins to determine their value. If there are only a few coins, you can always just look at the date ranges, and consult a price guide to determine rare years. These tips will help you sort through a big collection efficiently, but keep in mind that you do not have to sort any of your coins before coming into one of our locations. We are happy to do all sorting with you and can answer any questions you might have along the way.

Step 1: Magnet test – Canadian silver coins are not magnetic, so anything that jumps on the magnet can be set aside.

Step 2: Obverse sorting – Take a look at the obverse (heads) side of the coin. Using the portraits you can quickly sort the coins into date ranges – way easier than squinting for the dates at this stage initial sort. 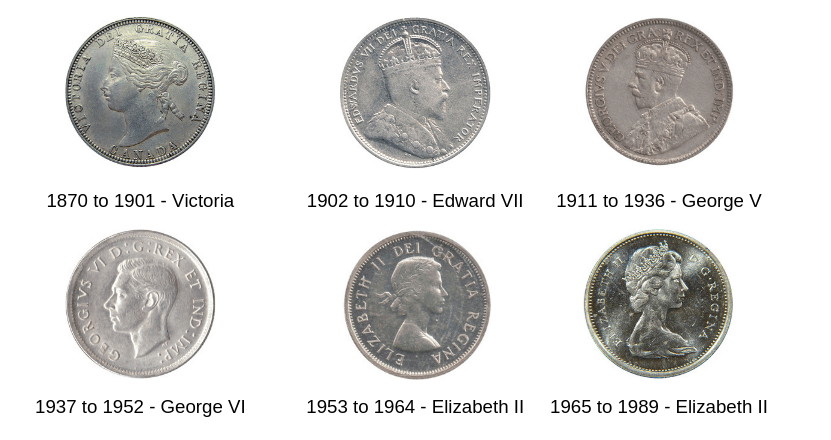 Step 3 – Final sorting – Based on the portraits, we do a final comb through for numismatic value and for silver purity. Here is what we do for each range.

Victoria, Edward VII, George V: Fewer than 5% of the coins we see are within the range of dates that include one of these portraits. It is worth reviewing each individual year with a price guide like the one below to determine which coins are worth more than melt. Coins with these portraits are split between 92.5% silver (pre 1919) and 80% silver (post 1920), so any coins that might be melted with be sorted by purity for accurate and fair payout.

George VI: ~5% of the coins we see. All of these coins are 80% silver, and most years sell for melt value. Keep watch for the 1948 dollar in particular. This rare coin is usually worth over $600 and one in specimen condition is worth thousands.

Young Elisabeth: ~50% of the coins we see. All of these coins are 80% silver and are very rarely worth more than silver value.

Slightly less young Elisabeth: ~40% of the coins we see. Some of these coins are 80% pure, some 50% – magnetic, non-silver coins will have already been removed. Since there are different purities with this same portrait, you will need to sort based on the dates. 1965 and 1966 as well as 1967 dollars and half dollars contain 80% silver. 1967 quarters and dimes are evaluated as an average of 65% silver. Non-magnetic 1968 quarters and dimes contain 50% silver (any magnetic 1968 coins have no silver).

US quarters, dimes, dollars struck before 1964 will have some silver content as well, and US half-dollars contained silver right up to 1970.

A coin’s value as a collector’s item depends on many factors. These include its condition, historical significance, rarity, quality, design and general popularity with collectors. Generally speaking, most circulated Canadian and American silver coins are worth their material silver value, but there are certain exceptions usually based on rarity. 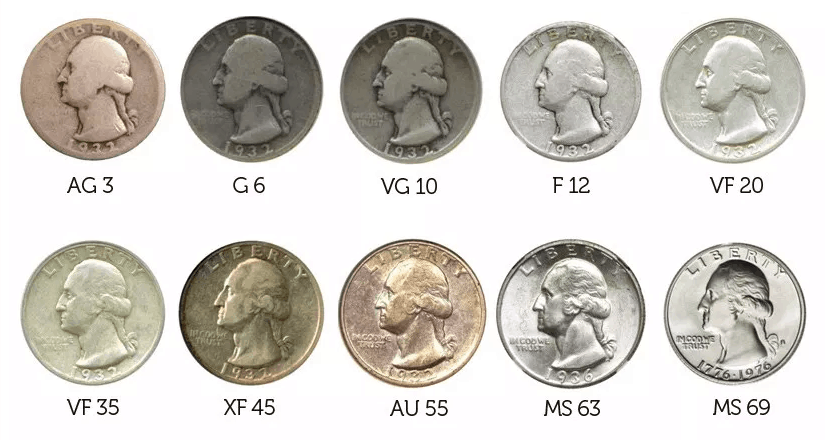 CONVERT YOUR SILVER COINS TO CASH

With today’s silver coin prices, your silver coins could be worth more than you think! Canada Gold offers the highest cash payouts based on the amount of silver in your coins.

Types of coins containing silver include:

What to do with the (many) gold earrings where I only have one of a pair or broken pieces? With Christmas coming up, I thought I’d see if I could sell them for extra cash. After talking to friends of friends, Vancouver Gold seemed to be one of the more reputable places to take my small collection of odds and ends. The offices are clean, the staff are friendly, efficient and knowledgeable. They test and weigh the gold then calculate the cost. There is no obligation to accept their offer. – Yelp Review

Canada Gold sells diamonds graded by the Gemology Institute of America: the leading experts of diamond analysis and grading. Find out how much your diamond is worth here.

Canada Gold is proudly accredited through the Better Business Bureau. This shows our commitment to providing superior customer service every time you visit.

Canada Gold is proud to be an authorized DNA dealer for the Royal Canadian Mint. We are able to instantly authenticate any registered mint coins.