In What Makes a Coin Valuable  we found out that there are several different things to consider when evaluating coins. There are the niddy-gritty details that numismatists look for such as condition, toning, and rare varieties, but most of the time, a coin is considered valuable because there aren’t a whole lot of them. In other words, we are considering their availability or mintage.

Most currency coins have a very high mintage because they are meant to supply an entire country with them. And because there are so many being made each year, often a country will have coins minted in different locations. To indicate the different mint facility, the coin will be stamped with a mint mark, and these variations can add value because they are unique to other coins of the same type. 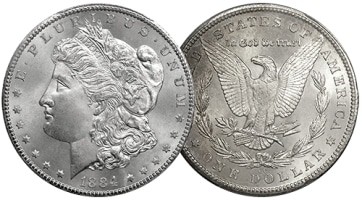 A great example of this is the historic U.S. Morgan Silver Dollar (above). Minted between 1873 and 1904, and briefly in 1921, the Morgan Dollars were made to be silver trading dollars. After 1904, silver reserves ran low and the U.S. mint stopped making these coins. Many were taken out of circulation and melted for their silver under the 1918 Pittman Act, and others were kept in the U.S. Treasury’s vaults, thus never seeing the light of day. It’s relatively short life-span made it a sought after coin for collectors. However, one particular Morgan Dollar rises above the rest in terms of value and collectibility: The Carson City “CC” Morgan Silver Dollar.

Carson City, Nevada was one of five mint locations along side Phildelphia, San Francisco, New Orleans and Denver that was producing the coin. Carson City was built because of the Comstock Lode discovery in 1859 – the largest gold and silver mine in U.S. history. This alone made Carson City a major city during the frontier gold rush, a time of the Wild West, economic expansion, and the U.S. Civil War. Some of the mined gold and silver was sold to the Carson City Mint, and minting began in 1870.

Each mint facility had their own mint mark: No mark for Philadelphia, “S” for San Francisco, “O” for New Orleans, “CC” for Carson City, (and “D” for Denver for the 1921 Morgan Dollars). 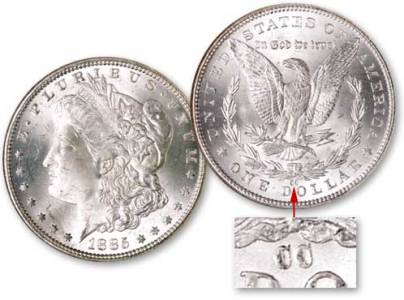 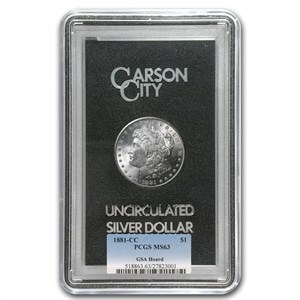 What was so special about the Carson City Morgan Dollar? What made it stand above the rest? A lot of this story comes from its mintage, and what happened to the Carson City variety after the Morgan Dollars were taken out of circulation. There were only twelve minting years in Carson City (1878-1885, 1889-1892) and the mint facility was poorly equipped compared to the other mints, thus far fewer were made suitable for circulation. Once the Morgan Dollars were taken off circulation, many were melted down, while others were stored in the Treasury’s vaults. It wasn’t until the 1960s when the Treasury finally opened the vaults to collectors and started selling the Morgans for face value. The Carson City variety, however, were held back because of their particularly low mintage numbers. The General Services Administration was invited in the early 1970s to oversee the management and sale of the Carson City Morgan Dollars, and because of their mint-state, rarity, and historical significance, they became sought after and extremely valuable.

The Carson City Morgan Dollars range between $200 and $4000 depending on the year. Certain years have very low availabilities (or survivabilities) such as the 1879, 1889, 1892 and 1893. By all means, this is not the rarest of coins, but they do hold considerable value to collectors wishing to complete their set of Morgan Dollars. If you have a Morgan Dollar and want to see where it stands, check out Amazon’s Coin Store.